“All of Humanity Must Know This”

It’s been almost six months since I visited the border town of Kilis, Turkey, and met with refugees who’d fled the horrific bombings and gunfire of Syria’s civil war. Most of the men, women, and children I met with had lived in Aleppo, Syria’s most populous city and a world heritage site that has been all but destroyed after more than three years of bombings and siege by the regime of Syrian dictator Bashar al-Assad. Kilis is about 75 miles from Aleppo, and we watched as refugees poured over the border during the short time we were there. Since then, the violence in Syria has only worsened, and the crisis for refugees even more grave.

Yesterday the United Nations’ World Food Programme announced that it is out of money for Syrian refugee families, just as winter is approaching. The Syrian refugee crisis is the defining humanitarian crisis of our time, yet the world doesn’t seem to be waking up to the dire need to help people today–and in so doing, secure a safer future for all of us in the years to come. I’ve noted before that refugee crises have long-term consequences that should and must concern us.

As of right now, these are the basic stats in Syria: More than 190,000 Syrians have been killed–most by their own government. More than three million refugees (roughly 15% of Syria’s total population) have fled to Lebanon, Turkey, and Jordan. More than 6.5 million Syrians are displaced within Syria (about 1/3 of Syria’s total population), either unable to escape siege by government forces, or choosing to remain in Syria rather than face desperate conditions in refugee areas outside of Syria.

But numbers alone never seem to convey the severity of any crisis. It’s astonishing to meet real, live people, to talk with them and cry with them, to hear their stories of survival and loss–as in, everyone we met with had lost family members–and then watch as even the United Nations cannot deliver aid to them. Nonprofits are stretched thin. And the need is only getting more overwhelming by the minute. 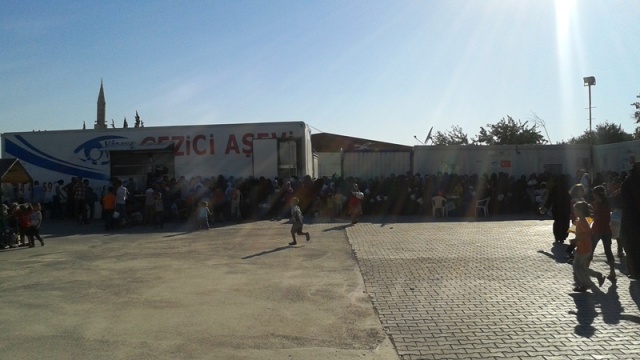 The line for hot food, where women from the refugee camps wait to provide for their families

At the end of our day in Kilis, we asked our host what we needed to tell people about the situation there. He paused for a moment and eloquently stated the basic facts as he saw them. I wrote down each of the sentences he spoke. These were his direct words that I will now share with you:

People are being killed in Syria with no justice.

Syrian children are being slaughtered without compassion.

Millions of Syrians have sacrificed their lives, their homes, and their country.

Syria will not recover for decades.

Not one but many generations have been wiped out.

All of humanity must know this.

It will take the world to fix this crisis. But even a few dollars from you can help feed a family in need right now. Tonight I am hosting a fundraiser in Washington, D.C., along with the handful of other Americans in my group who visited Turkey last summer, to raise money to help the Syrians we met. It would be great to see you there tonight, but it would also be fantastic if you had a few dollars to give toward our fundraising drive.

More than anything, please care about this. And please share your concern with others. Together we can help change the tide of this crisis.

8 thoughts on ““All of Humanity Must Know This””