I spent my first week in the Philippines at Tacloban Airport, where the first scenes we saw were of masses of local Filipinos waiting to evacuate the large-scale devastation of the region. When I arrived with Team Rubicon on November 12, the Philippine military and the U.S. military were running nearly continuous C-130 flights–bringing in cargo (and some passengers, including aid workers and journalists), and flying back to Manila filled to capacity with evacuees. During my entire time in the Philippines, the crowds of waiting evacuees were a persistent feature of Tacloban’s DZR Airport.

The airport terminal itself had been transformed by the storm into just a frame of a building, with metal struts hanging down into open, empty spaces. Crumbled concrete, twisted rebar, and debris were everywhere. The control tower was still standing, but all the glass was blown out of it. On the far end of the airstrip were the smashed cinder-block barracks of the Philippine Air Force. There were no lights at night during the first few days after we arrived. Marshes behind the airport’s shattered buildings were stagnant with black, debris-filled water. The stink of death and decay wafted on the breeze.

But even in the early days of the massive crowds of evacuees, people waited calmly, blocking the relentless sun with cut-up cardboard boxes, and standing in the equally relentless rainstorms that would blow through several times a day, and through the night. In those first days, there was no food or water for any of the waiting evacuees–they had only what they brought with them, which was little or nothing. People collapsed after waiting hours or days in line or on the tarmac. A makeshift aid station was set up in a partially destroyed building near the control tower, where a few Philippine military doctors and medical staff attempted to care for as many dozens of patients as could fit inside the aid station and a tarp that was set up as an outside waiting area. Team Rubicon medical staff worked to bridge the gap, attending to waiting people on the tarmac, in lines, and in the aid station. But it was truly staggering.

As the days passed, the U.S. Marine Corps helped to set up a water purification operation at the airport, and the Philippine police took large blue jugs out to the waiting crowds and passed out water. A few more days passed and there was food to pass out. But those first days were terrible to witness. The lines moved–because the U.S. and Philippine military transport kept moving, day and night. I remember talking to the U.S. Army major in charge of U.S. operations at the airport one morning, and he said to me with a tone of accomplishment, “We moved 1,000 people out last night.” I was amazed. But there were still thousands more waiting in line. 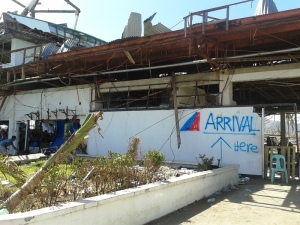 The remains of the terminal at Tacloban’s Daniel Z. Romualdez Airport

I passed through the waiting crowds many times, and was always careful to say “sorry” or “excuse me” as I made my way through, never wanting to forget that these were people who had lost everything. But every time I passed through, I was always amazed that every last person, as I touched a shoulder, or smiled sympathetically, was always polite to me. No one ever asked me for anything. Never did I ever receive an unkind look or word. Sometimes people would thank me for coming to help, or they’d ask me what country I was from. I was always proud to tell them I was American, and that Americans were happy to help their friends in the Philippines.

One family in particular I will always remember. Team Rubicon medics had been working in the aid station, and I was in there, helping to find the right size bandages (or cut them to the right size), and I talked with a young pregnant woman who was getting care for an infected laceration and the high fever she had as a result. Her sister was with her, and we learned that the rest of their family, including young children and the sisters’ elderly mother, had been out waiting in line for some time. The pregnant woman would be prioritized for evacuation, and the sister wanted to know if her elderly mother and young daughter could be prioritized with her to get them out and so the pregnant woman wouldn’t be alone. This sounded totally reasonable to me. So we talked with the Philippine military folks in charge and got this to happen, then we went out with the sister to find their family in line and helped carry their bags–with their only remaining possessions in them–to the aid station.

As I talked to the sister, I learned that she had flown down to Tacloban from Manila with her husband to rescue her family. I was floored. We couldn’t get her and her husband prioritized for evacuation along with the more vulnerable members of her family–but I could see their relief that their elderly mother, the pregnant, ill sister, and the baby would be safe and taken care of as soon as possible. I walked with the sister and her husband as they went back in the long line to wait their turn to get on a flight, and I told them how amazing and brave they were to come back for their family. “We do what we need to do,” the sister told me. She thanked me for what we did to help them, and then she bent down to open up her one single bag of possessions to pull out a bag of crackers she had.

“Please take some food,” she said, offering me what she had. I was already floored by her bravery–and her generosity just made me cry. Even though some crackers might’ve been a nice change from my days of eating cold MREs, I couldn’t accept her kind offer. But I gave both her and her husband a hug as I left them in line. And I’ll never forget their kindness and generosity in the midst of such a desperate situation.

All told, the U.S. military reports that approximately 20,000 evacuees were transported out of affected areas. If that does not count the evacuees transported by Philippine C-130s and other international militaries (such as Singapore, Malaysia, Thailand, Australia, and others that I saw), then that number would be higher. It was an incredible effort, and so important to each and every family’s story out there.

74 thoughts on “Waiting at Tacloban Airport”